People accused of crimes typically know that they are not required to testify at trial. People often do not understand, though, that while defendants cannot be forced to offer defenses against the prosecution’s claims, they do have a statutory right to mount a defense. If that right is violated, it may constitute a basis for granting a new trial. A Michigan court recently explained how an appellate court assesses whether a trial court violated a defendant’s right to offer a defense in an opinion issued in an assault case. If you’ve been charged with assault, you should speak with a Michigan criminal defense lawyer about your options.

Arrest and Trial of the Defendant

It is alleged that following a fight with two women, the defendant was charged with multiple assault offenses. The defendant acknowledged that he had a disagreement with the alleged victims, but claimed that they conspired to make false accusations against him. The first woman, on the other hand, said the defendant tried to stab her, pointed a gun at her, and scratched her face, while the second woman claimed the defendant threw her to the ground and attacked her with a knife. The defendant was found guilty as charged by a jury. He filed an appeal, claiming, among other things, that the trial court infringed on his constitutional right to present a defense by barring evidence about other acts.

The appellate court dismissed the defendant’s appeal after reviewing the facts. The court clarified that a defendant must raise the question of whether a trial court’s evidentiary decision deprived him of the right to present a defense at the trial level, in order to preserve the issue for appeal. In the case at hand, the defendant neglected to argue at trial that the testimony in question was admissible under Michigan Rules of Evidence or that his right to present a defense was violated because it was not admitted. END_OF_DOCUMENT_TOKEN_TO_BE_REPLACED

If you are arrested, contact a lawyer immediately and do not say anything incriminating to the arresting officer that may be used against you as evidence in court. Did you know that you do not have to say anything to

the officer arresting you besides your name and birth date? The police officers may attempt to bully or intimidate you into giving them more information. Always remain calm and never resist the police. Being difficult with the police will only escalate the situation and will not benefit you in any way. Even though you feel scared and powerless, try your best to keep a clear mind.

The Miranda Rights are several fundamental rights everyone has immediately after being arrested by the police.

The Miranda Rights are: 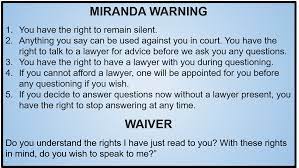 You have the right to remain silent while being interrogated by the arresting officer.

You can refuse to answer any of the questions that the arresting officer asks you.

You have the right to consult an attorney before speaking to the police and if you cannot afford a lawyer, the government will provide a lawyer for you.

A very common mistake people make once they are arrested is that they feel panicked and tell the police officer incriminating information. One of the smartest choices you can make immediately after being arrested is to call for a lawyer and not say anything to the arresting police officer before the lawyer arrives. Consulting with a lawyer will ensure that your rights are not being violated. Lawyers are experts with helping people immediately after they are arrested by the police. Defense attorneys always deal with clients right after they are arrested and will work effortlessly to ensure there were no legal flaws involving your arrest.